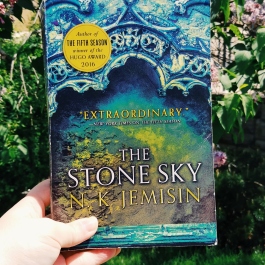 This series totally blew me away! N.K. Jemisin is definitely going to be a new favorite of mine. I listened to the audio on Audible but also borrowed physical copies from the library so I could switch back in forth. I ended up loving the series so much, though, that I bought a paperback set of the books which I had N.K. Jemisin sign at Book Con. Meeting her was such a dream, by the way! She was so nice and made me want to read all of her published works even more.

The Fifth Season (the first book) begins with a rift opening in Earth which causes catalyptic damage to a world that was already destroyed long ago. But, it also begins with Nassun discovering her dead two-year-old son who had been murdered by his father. Then, Nassun sets out to find her daughter, who the father took with him. This is how the story begins but it grows with each book to become so much more. There was also a lot of great social commentary which I loved getting in a fantasy setting.

There were multiple POVs in each book but I thought each was equally strong and I never found myself hoping for a certain character’s chapter to end. The characters were all wonderfully written and I enjoyed getting to know them better with each book and watch them develop. Each character had their own distinct motivations that made them seem real. No character was fully good or fully evil; even favorite characters were totally flawed. They were truly human.

The world building continued to amaze me more and more with each book in the series. When an apocalypse happens you expect the world to be in chaos and this series certainly delivers. It also introduces us to some truly scary and some pretty creepy creatures. This is not a world I would want to live in but I loved reading about it.

If you’re looking for a diverse fantasy read with lots of twists and turns that will keep you guessing and leave you speechless, this series is a must!